Lost Art is back!  After a long hiatus, during which I primarily worked on my portrait series at the Chateau de Courances, I'm very happy to be back to work on my Lost Art series! This new one was one of the most challenging yet, as the stove top element I found was heavy and difficult to maneuver. It broke both my easels while I was working on it :(. But I managed to get it painted, and to leave it in the park near the home of a friend of ours in the 16th. I left a sturdy Ikea bag with it, so that anyone who finds it will have a fighting chance of taking it home with them. I hope that its weight doesn't dissuade someone from taking it! I had mixed feelings about that problem. But in the end, I was inspired by the object, and it was already discarded in the street anyway, so I guess I didn't make its fate any worse. Now we'll just have to see if someone else is inspired enough by its new incarnation to pick it up and give it a good home. If you're in the neighborhood, maybe you could walk by and check on it for me? And if you know somebody nearby, please feel free to share. Next week I'm on my way back to the States, so hopefully I'll be leaving one there over the holidays. My warmest winter wishes to you all! 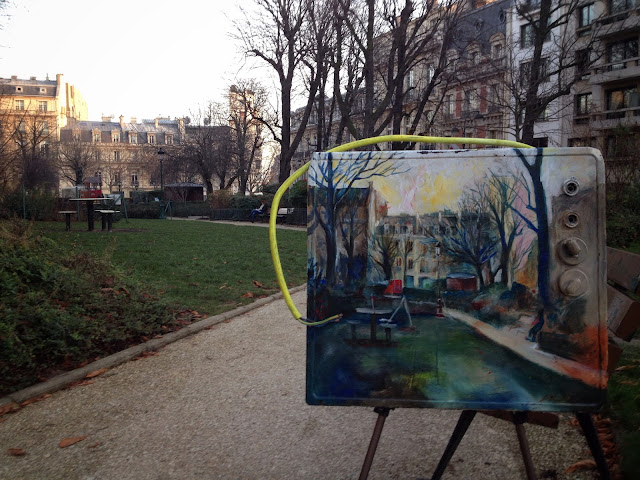 This painting, acrylic on found stove top, 58cm x 51cm, was left in the Square Thomas Jefferson, at Place des États-Unis in in the 16th arrondissement of Paris, on December 14th, 2016 at 4:30pm.