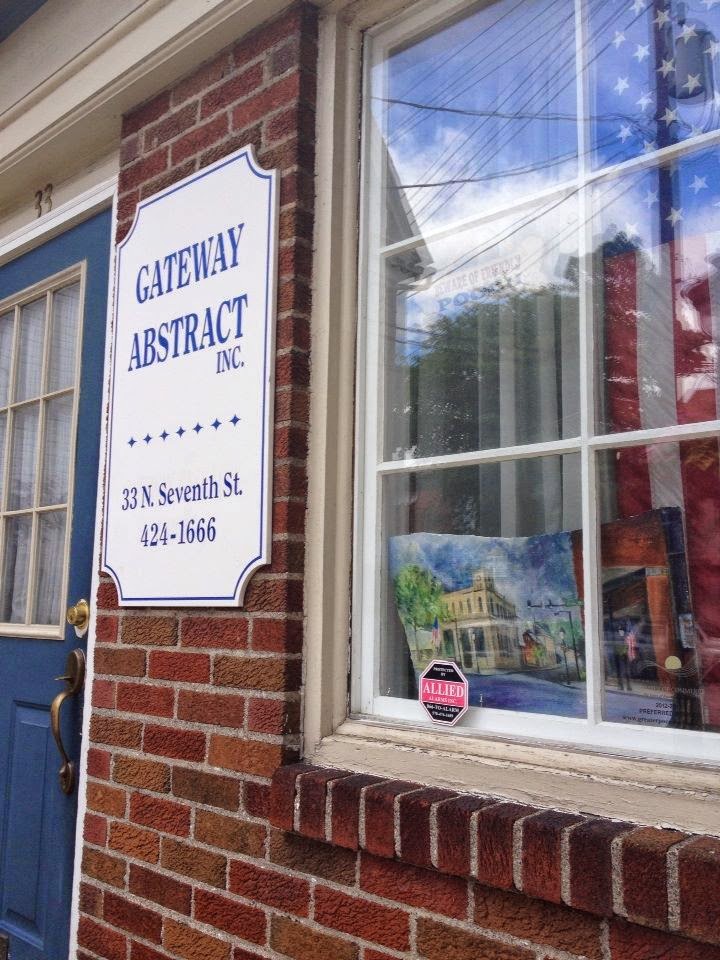 This week's Lost Art painting, number seven in the series, was left in Bethlehem, Pennsylvania, on the East 1st Street walkway below the famous Steel Stacks. It's the second painting to be left in PA so far. Just as I left it, there was a large crowd arriving to watch the USA-Portugal World Cup match on a giant outdoor tv. I wonder if some lucky soccer fan will notice the painting as they pass by!

Posted by Leslie at 4:49 PM No comments:

UPDATE: Lost Art #6 has been found!
When I was visiting my hometown for the holidays last week, I was happy to discover that one of my Lost Art paintings from last year had found itself a home! One of the guys who lives on Crystal Street had picked it up and carried it into East Stroudsburg Hardware (the store that figures prominently in the painting) and given it to the owner, Jim, who now has it proudly hung on the front of one of his glass display cases. When I heard he had it, I went over there to introduce myself. It turns out that Jim is a big supporter of local artists and has several other paintings and pieces of art in his store. I'd been driving past his place for years and hadn't even known! He said that he would have gladly written in to the blog, except that he doesn't use the internet very much and wasn't sure about the address. So I'm very glad that the word got back to me that the painting had found an appreciative home. And I'm glad I was able to find Jim over the holidays and thank him for looking after it! Here are some pics I took of Jim and of the painting where it now hangs. Another Lost Art is found! 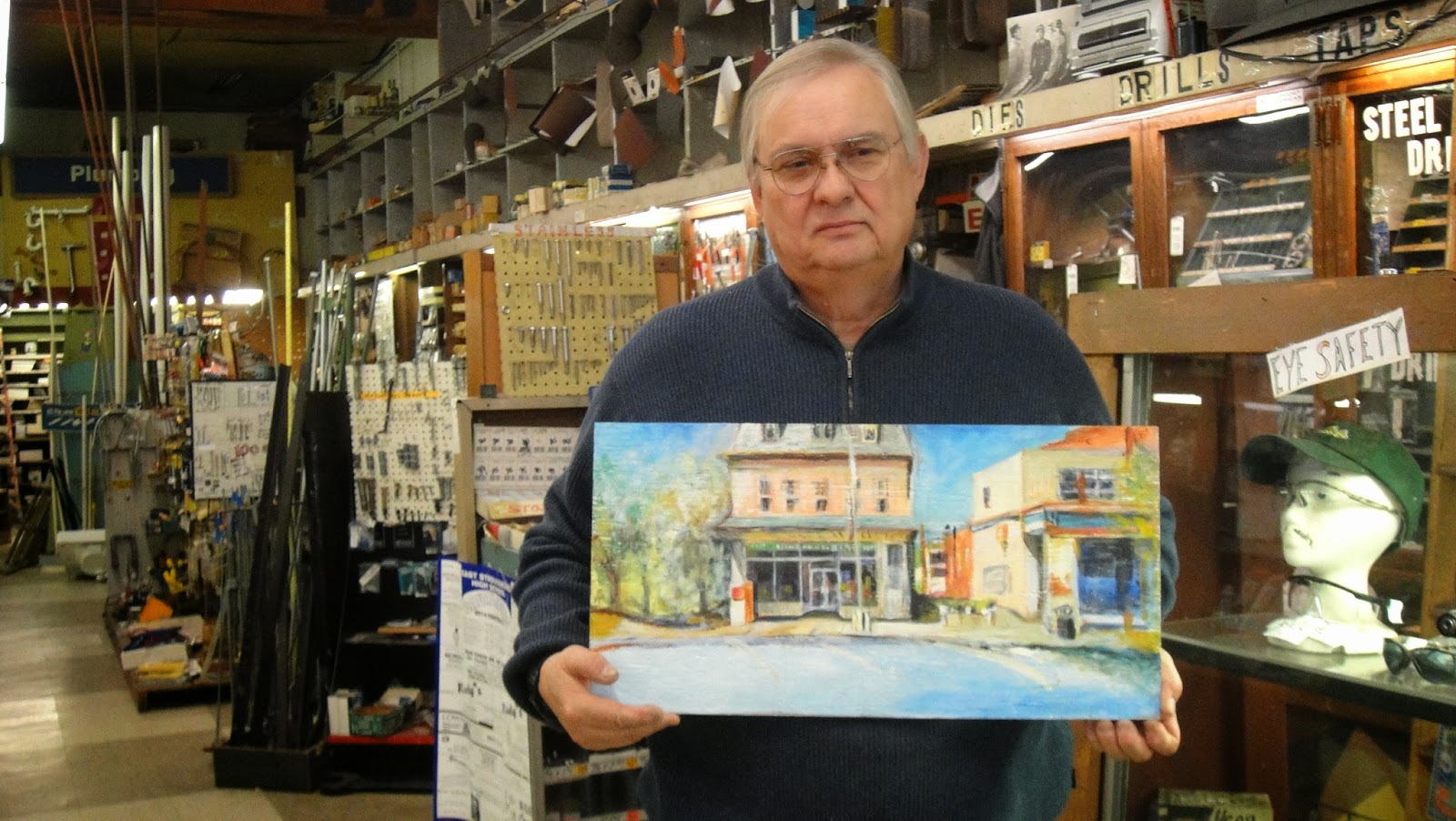 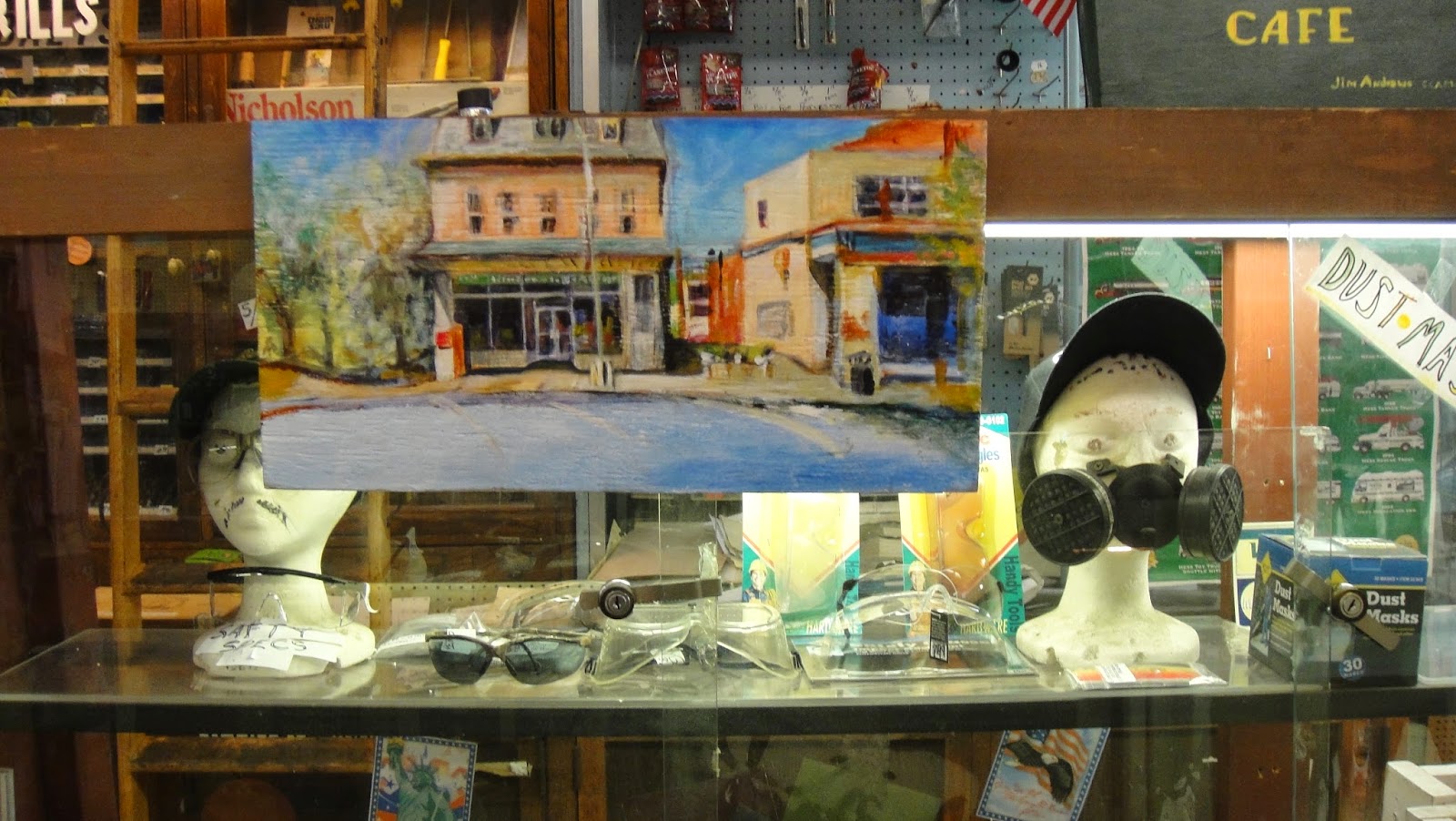 Original Post:
I'm excited to announce that this week, Lost Art makes its first official appearance in the United States! This morning, the sixth painting in the series was left on Crystal Street in East Stroudsburg, Pennsylvania. I'm looking forward to hearing from whoever finds it! And keep your eyes open over the next few days if you happen to live across the river in Stroudsburg, or down the road in Bethlehem, as these are among the locations I'm considering for Lost Art number seven.

This week, Lost Art made its first official trip across the Seine into the St Paul neighborhood in the 4th arrondissement. This is the fifth painting in the series, and still no word from those who have found the first four, but the project continues to spread! Over the next few weeks, Lost Art will make its first appearances in the United States (I'm talking to you, Pennsylvania!) so keep a lookout for them there. The series will resume in Paris at the beginning of July. I hope you're all having a great summer, and as always, let me know if you find one of the pieces!

This painting, oil on found broken wood, 31cm x 85cm,
was left on rue Charlemagne near the intersection of rue du Fauconnier in Paris on June 8, 2014 at 5:30pm.

The saga continues!!
I can only hope so far that all my pieces have found happy homes. No word yet from anyone about having found any of them, but maybe I'm just not hitting the right neighborhoods yet :). There is, however, one great piece of encouraging news. The other day I heard from UK photographer David Wise who was inspired by the Lost Art project to leave his camera to be found on a mountaintop in Sri Lanka. He also wrote about that decision, and about my project, on his terrific N.U.M.A. blog, which I highly recommend. This bit of response, and the reminder of how far and fast an idea can travel, has definitely helped me find the motivation to continue. Thanks David!  Today's painting was left on the left bank of the Seine, which should be crowded on such a lovely day. And the wait begins again!

Posted by Leslie at 7:32 AM No comments: